The Knight Times • May 26, 2021 • https://nanuetknighttimes.org/arts-entertainment/2021/05/26/music-is-in-the-air-check-out-nanuets-spring-music-concerts-this-week/

Music is in the Air: Check out Nanuet’s Spring Music Concerts this Week 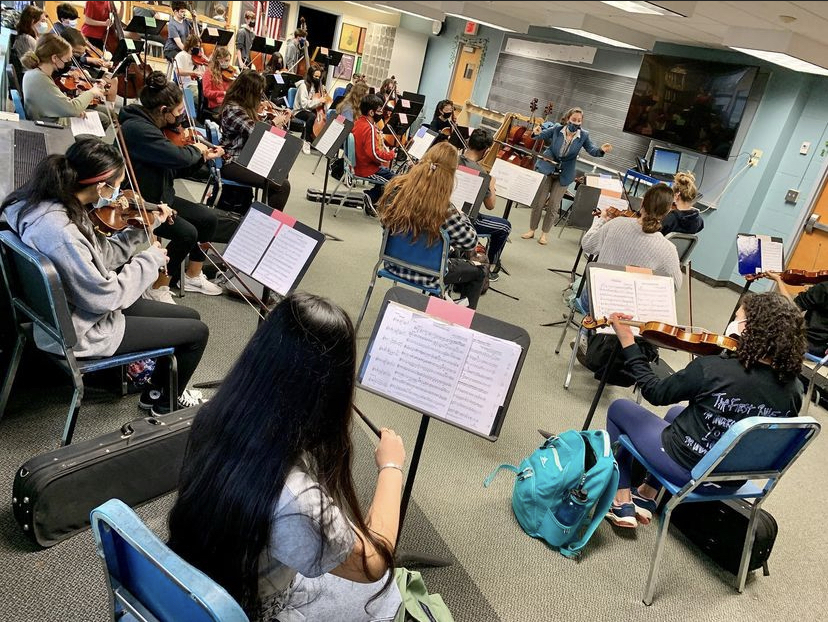 It has been over a year since Nanuet High School’s musical groups have performed for a crowd. Members of the Band, Orchestra, Chorus, Jazz Band, Chamber Orchestra, and Concert Choir have been eagerly awaiting a return to some sort of normalcy. In previous years, each ensemble has performed thrice every year, with each group showcasing their talent and hard work at a Winter Concert, Spring Concert, and some sort of mid-Winter Concert.

Neither the mid-Winter Concert nor the Spring Concert were held last year due to the unfortunate circumstances associated with the pandemic, however, this year, each group has been anxiously anticipating performing for an audience again. These concerts may look a little different than those in previous years, but the student-musicians in each ensemble have worked tirelessly to ensure the delivery of an entertaining show.

While everyone is excited for this year’s performances, they will still be adapted to comply with health and safety guidelines, and to better conform to our present situation.

Director of Music and Band Director Dr. Skaba explained some of the changes in the performances, which include a minimized audience.

“For one thing, there will not be an audience,” he said. “The band, orchestra, and chorus are going to play for each other and we are going to record it. We will also be following all the CDC guidelines for playing instruments and singing – so it might look different, too!”

Although only members of the Band, Orchestra, and Chorus can view the concerts live, they will still be available to parents, all-virtual students, and the remainder of the community.

“We will record the performances and send links out for people to watch,” he said.

Some other impositions will be in place for safety purposes, according to Mr. Miller, director of the Jazz Band.

“We will be distanced on stage with [modified] masks and bell covers,” he said. “Jazz bands are smaller and use a tight stage set up.”

Even with these in-person accommodations, all-virtual students in the Band, Orchestra, and Chamber Orchestra will still have the opportunity to play alongside their fellow musicians.  According to Dr. Skaba, this was one of the most difficult parts of organizing these concerts.

“Remote students will Zoom in and play from their homes,” he said. “We will project the Zoom up on the wall. They won’t be able to be heard, but at least they can participate in the performance.”

The dedicated teachers of our school’s music department are taking various precautions to ensure safety among students. While adjustments have been made, they do not lessen our musicians’ eagerness to play for their peers.

Our school’s student-musicians, as well as our teachers, cannot wait to share their accomplishments with others, and they are all excited for different reasons. Some are excited to simply play for an audience, while others are eager to merely have some fun.

These performances also serve as two of Nanuet’s music teachers debuts as ensemble directors. Ms. Sadoff of the Orchestra and Chamber Orchestra, and Mr. Sauer of the Chorus and Concert Choir, are both working towards the end of their first years here at Nanuet. Both have  worked hard with their students to make sure that they put on great performances.

“I’m thrilled to be performing alongside our talented Nanuet musicians,” Ms. Sadoff said. “Since I was hired in the fall, this will be my premiere! The stakes are high, and we are ready to share our art for the first time in a very long time.”

According to the ensemble directors, a variety of music will be played at the performances. From West Side Story to Harry Styles, these concerts are definitely something to look forward to.

While the Band is performing both some fun and serious music, including a piece called “Celtic Air and Dance” and a “West Side Story” medley, the Jazz Band is performing “Chameleon” and “Watermelon Man” by Herbie Hancock, which are “funky,” according to Mr. Miller.

The Orchestra and Chamber Orchestra seem to be following a Broadway musicals theme, as they are performing songs from various musicals, including Annie and Mamma Mia!  Ms. Sadoff said she is excited to showcase her ensemble’s talents through these pieces.

“The Nanuet Chamber Orchestra has rehearsed a number of pieces and we have decided on two to showcase our excellent work in such a strange and abbreviated circumstance,” she said “We are very excited to present “Reflexions” by Carold Nunez. This piece has a jazz-waltz feeling and is a ton of fun to play, despite its very challenging unrelenting rhythmic intensity.”

Last, but not least, our school’s chorus is also performing some exciting music at the upcoming showcases, according to Mr. Sauer.

“The chorus will be performing a variety of songs,” he said, from traditional choral repertoire to Harry Styles!”

All of these performances have been meticulously planned by the music teachers to not only ensure that a great show is put on by our students, but to maintain safety within our school community, as well.