The Show Must Go On: ‘All in the Timing’ to Take the Stage this Weekend 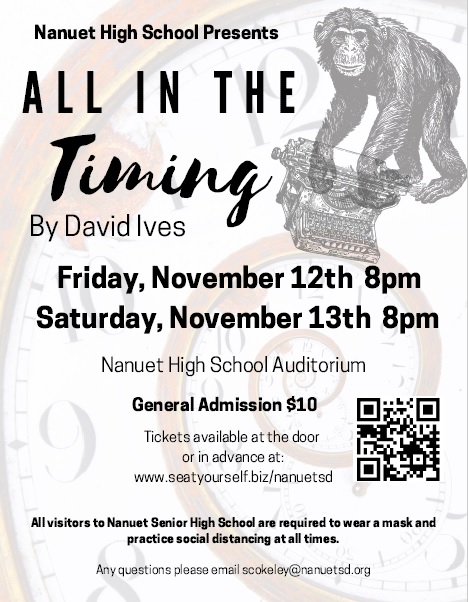 The Nanuet High School Drama Society will perform a rendition of All in the Timing by David Ives on Friday, November 12th and Saturday, November 13th. The show will represent a revival of Nanuet’s theater program, which has been unable to produce a traditional show since the start of the pandemic.

The show serves as an important milestone in Nanuet High School’s return to normalcy since the beginning of the COVID-19 hiatus. This weekend’s production will be the first public performance in the high school auditorium since the early months of 2020.

This anticipation elevates the significance of the show, according to Ms. Cokeley, director of the production. Members of the cast and crew have long awaited a return to normalcy in Nanuet’s theater program.

“We are back on stage and in person,” she said. “This is an extremely talented group of actors who have been waiting patiently to get back in front of a live audience. They have worked hard to put on a great show!”

The performance will include two acts, with each act divided into three scenes that cover a variety of topics, Ms. Cokeley added.

“The show consists of six one-act plays with an intermission,” she said. “The audience can expect a witty, romantic, absurd, and existentially-minded evening of theatre.”

Preparing for these performances has required much hard work and dedication from a multitude of students and faculty. Seeing the cast and crew work hard and learn is an important part of high school theater, Ms. Cokeley remarked.

“My favorite part of preparing for this show has been getting to know the high school students,” she said. “I have loved watching the actors step into their characters and grow as performers.”

The dedication surrounding the production of a show creates strong connections between members of the cast and crew, according to senior Nate Klayman, a student-actor featured in the upcoming play. According to Klayman, high school theater can have a lasting impact on students’ lives.

“When preparing for a show, the relationships made along the way have to be my favorite part,” he said. “Obviously creating a show from nothing is amazing, but the people you meet that [you may never have] talked to become bigger parts [of] your life [than] you might expect.”

The production All in the Timing signifies yet another great step towards normalcy, and it exhibits the tireless work of students and faculty who have helped prepare for the show. The community should come enjoy the play and support the cast and crew, Klayman added.

“People should come watch [the production] so that they can witness a piece of art that tons of people worked extremely hard to create,” he noted. “Watching a story unfold live in front of you is not something you see very often, [which makes this show] very special.