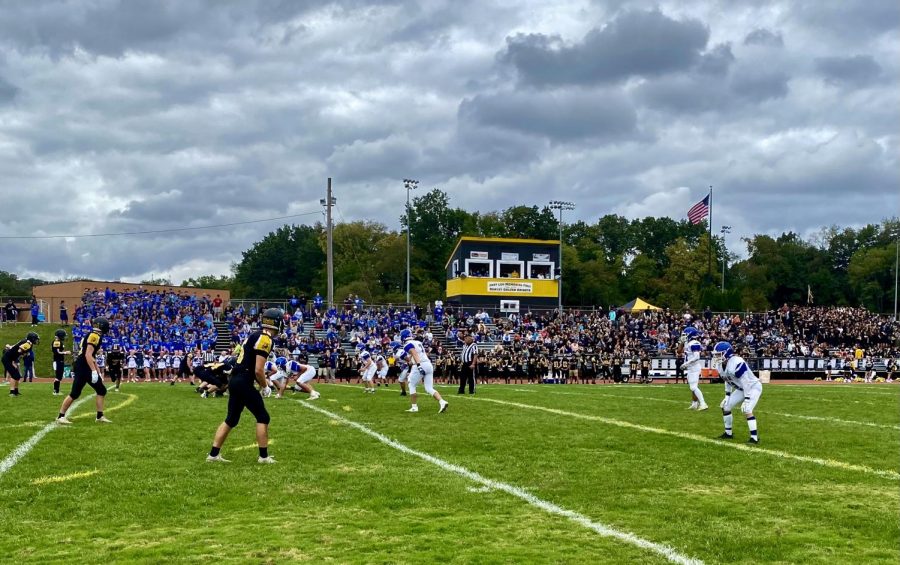 The 55th Annual Little Brown Jug game took place at Nanuet, on October 9th 2021. The rivalry between Pearl River and Nanuet has been going on for decades, and the Golden Knights have deservingly kept the jug at home.

The Knights started off on the right foot, leading 12-7 in the first quarter. Nanuet’s defense was strong and responded well to each of the Pirates’ plays.

The anticipation and excitement leading up to the game had fans and players thrilled. Nanuet, who has remained undefeated so far this season, knew that they had a lot to prove in order to maintain that status. Prior to the game, the team revealed that most of them felt very anxious. Senior and running-back, Brendan Bennett, expressed his feelings before and after the game .

“Leading up to the jug, I was very excited because it’s always a good time playing your rival,” he said. “We all knew there was so much at stake. It may seem like it’s just another game, but it feels like so much more than that.”

Bennett also described the pressure he felt previously before the game.

“Out of all the games, this is the one game you don’t want to lose, especially it being my last year,” he said. “You just want to play hard and end on a good note.”

Bennett described the win as such an enriching experience. Everybody wants to win so badly, he explained, so when you achieve that goal, it feels amazing.

“The win felt so rewarding,” he said, adding, “hearing the fans in the full stands go crazy is such a surreal feeling.”

Jacob Wrobel, who is a junior and is right tackle on offense, described his feelings similarly. This year was Wrobel’s second Jug, but since last year’s season was delayed to the spring, this year felt completely different compared to last Spring’s game. According to Wrobel, it’s important to stay  optimistic and have an encouraging mindset before the game.

“Before the game I was a bit nervous, but I was pumped and ready to play,” he said. “Our coaches gave us good speeches, and me and my teammates were supportive and energized through it all.”

Nothing can beat that incredibly fulfilling feeling you get when beating your biggest rivals, according to Wrobel.

“What surprised me was how much we won by,” he said. “Overall, the game went well, we played hard and gave it to the Pirates.”

Nanuet’s very own James Moran, a junior, was named “Player of the Game” by Lohud. Moran scored three times and helped carry his team to a victory.

The game ended, with a score of 26-7, and the Little Brown Jug remains home at Nanuet. The suspense throughout the game really built up, which made it such a riveting  game to watch.

Varsity Football Coach and Nanuet’s Athletic Director Phil Carbone said he was proud of his team. can proudly applause his team.

According to a quote published in Carbone told Lohud, Carbone said, “They are a really tight-knit team. Chemistry is huge with any team. I’ve been around a long time and I can tell you that there are teams that have a lot more talent and they don’t have that bond. This team has it. That’s usually an X-factor. That’s good for them, that’s good for us, that’s good for the community.”